"Our 100th YEAR SERVING THE TOWN OF RUSH"

6-12-20 12:55 PM 6666 Rush-Lima Road - with a 15 to 20 MPH wind fanning the flames a working two story garage fire extending into the home. Rush FD dispatched with automatic mutual assist from Honeoye Falls, Henrietta, East Avon, Mendon, and Scottsville. HFFD Chief Hood on location at 12:58 reporting a working fire. Rush pumper 584 on location at 1:03 PM to secure a water supply and attacked the fire. Chief Jon Faugh arrived an assumed command. HFFD Chief assumed Operation. Rush pumper 582 on location at 1:05 and hit the fire with 200 gallons a minute from the deck gun. Ladder 560 set up and was supplied with water from 584. Henrietta 652 laid a 5" line from the north to supply 582 deck gun and two hand lines. 582s deck knocked a lot of the fire down so they could go inside and fight the fire.  The fire was cut off in the middle of the home but not before a lot of damage was done. The two story garage had collapsed by then.  The resident was taken to the hospital by HF-Mendon for smoke inhalation.  He reported a problem with a lawn mower that he had just put in the garage.  CHS & Rush FD Ambulance stood by for rehab. One kitty cat was rescued by Chief Faugh.  The Town of Rush Hwy Dept. responded with an excavator to pull the collapsed garage apart. A car in the garage was also a total loss. Monroe Co. fire bureau & 5th Batt. coordinator was on scene along with investigators and Rush fire marshal. Red Cross also responded. Everyone did an outstanding job at this call. No firefighters were injured. 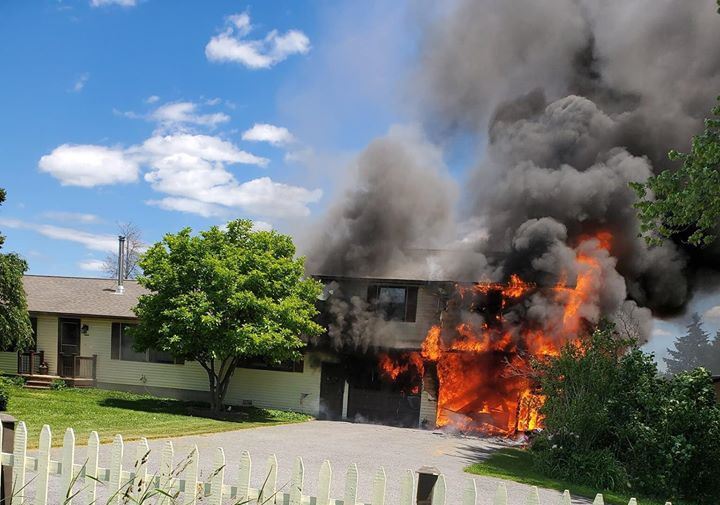 JULY MEETING:  Tom Dundon (Rush Explorer) and Sidney McDaniel were voted into the department.  Mike Terzo Jr. is transferring back to the Rush department.

CARNIVAL 2020:   WAS CANCELED - But we did the 50/50 Raffle - 565 Books were sold with three prizes of $460 each awarded.  THANK YOU TO COLBY'S and KEN'S PIZZA for providing the raffle tickets........The Community Challenge in Honor of John &. Anna Werner (Werner Farms)  raised $2,400 from the community & a $1,000 donation from the Werners. TOTAL $3,750.  Aux. member Debbie David coordinated that event. We also received several large donations from people to off set not having a carnival this year.

ANNUAL FUND DRIVE:  The request was sent out in early JULY. These funds along with carnival profit, Auxiliary donations & memorials has purchased 1.5  MILLION  dollars worth of Ambulances, Rescue Trucks, 4 Wheel Drive Units, ATVs, Boats & trailers along with items like the Jaws of Life,  Defibrillators (AEDS) and more equipment too numerous to list.  These purchases have kept your tax rate as low as possible.

The FIRE STATIONS are closed to the general public due to the virus.  We are still responding to any and all calls for service. Stay home if you can and use common sense before you do anything

CARNIVAL FOR 2020 IS CANCELED

Jenna Cirincione for serving as EMS Director of Operations. 2019 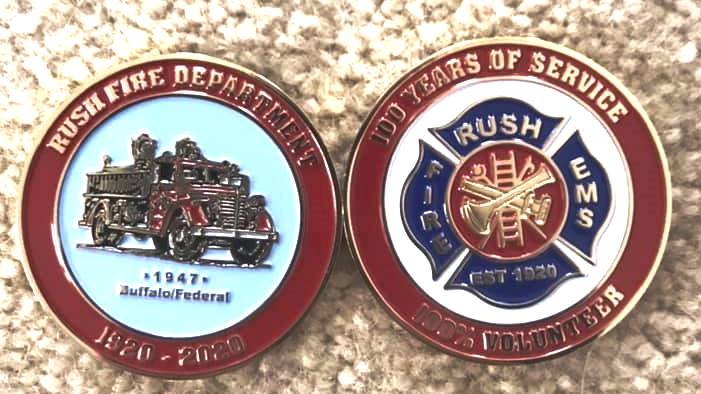 TO BUY ON LINE -  https://rushfdcoin.org

Our 100 year anniversary is in 2020 and the anniversary committee has a limited amount of fund raiser collector coins available to offset the cost of our many events for 2020. These collector coins can be obtained from some Rush firefighter including Jim Bucci, Duane Fanning, Tyler Grillo, Bob Faugh and Eric McNeil.  They are $10.00 from members. If you want one in the mail its $12.00.  Send a check made out to Rush FD to Treasurer Bob Faugh - PO Box 252, Rush, NY 14543.  The coin is 1.75 inches across